Obama,Clinton,McCain - Does it really matter? 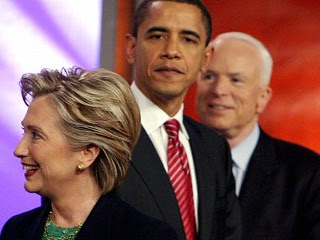 There is a lot of talk in the Indian media about which of the current US Presidential candidates will be the best for India.

"As president, I'll work to restore America's leadership in the world. And one of my goals will be to usher in a new era of partnership between the United States and India. We share so many of the same challenges and have so many of the same goals. Together, we can strengthen our economic partnership, combat terrorism, foster a stable and democratic Pakistan, advance democratic values, promote human rights, tackle global warming and address a host of other problems." - Hillary
Senator McCain has been a consistent advocate of free trade. If he merely persists with the Bush administration's stance towards India, arguably the most pro-Indian of any administration since 1947, he would be improving his relations with India

These presidential candidates are running to be the US President and will be focused on looking after the strategic interest of the USA.Hence it would be irresponsible for any American president ; Democrat or Republican to not ally with India. Hence in my opinion it really does not matter who wins the Presidential race as whoever does is definitely going to take steps to further improve relations with India