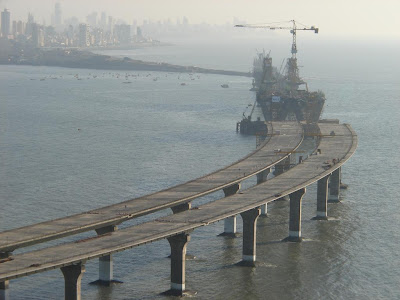 Discussing India's crumbling infrastructure is one of the Non Resident Indian's favorite pass time.Core infrastructure issues for India have revolved around communications, transports and power. However taking a deep dive into this subject shows us some interesting facts :
It seems the discussion now should be more about Urban India Infrastructure woes rather than India Infrastructure issues. India has made considerable strides in improving its overall infrastructure, however urban roads, bridges and traffic remains a problem . Our economic boom has driven large number of workers from rural areas into cities choking the traffic and other resources. I had read somewhere that Mumbai's population is equivalent to population of NewYork and Los Angeles in land mass of New York! As the benefits of the economic boom spreads to two and three tier cities ( a trend that is happening already) , a large number of people will not have to move for work which may reduce the strain on the urban infrastructure of the big cities.

We should take pride on what India has achieved using a democratic process with unique challenges such as coalition politics , poverty and a huge population; challenges that no country possess!
Posted by Man from India at 5:07 PM

One key to all of this is to improve the mass transit and commuter systems in India. Once you have the ppl using these systems, you will have a better opportunity to improve the older and crumbling infrastructure

great to see indias development...but i still fell it is just beginning..we have lot more to do..