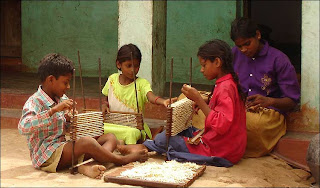 Recently GAP, the clothing chain in the has withdrawn a line of embroidered blouses on the news that garments were stitched by children. Time Magazine Article

has a large number of children living in poor economic conditions. These children work because if they don’t work, they would starve to death. The Indian government does not have the delivery mechanisms to reach out to these children in a population of over 1 Billion. The government probably does not even have an accurate count of the number of such underprivileged children in the country. Even if they attempted to compensate these children, the money would never reach the children due to corruption that exists within the government.

So, if a ban on Child labor would be imposed today it would only cut off their lifeline. Besides, these children would be vulnerable to other ailments plaguing the society like sex trade, drug trafficking etc. The ground realities demand that banning child labor is an inappropriate solution at this time.

Countries in the west have gone through a similar phase of economic development in the late 1800s and early 1900s when children used to work. Today they are pressuring developing countries to adhere to standards of child labor but companies force manufacturers in developing countries to keep costs low. To maintain low costs, manufacturers hire young children to do the jobs. Whenever a story like the "GAP incident" unfolds, the media makes a big hue and cry about Child Labor but almost never explains the reasons of child labor in some countries. To prevent loss due to reputation, the companies then stop doing business with the manufacturer but look for other manufacturers who have a different name but the same business model. The story always goes a full circle and the core issue is never addressed.

MUST achieve its goal of banning Child labor and providing education for all children, BUT it cannot be done in a day. The issue needs to go through the regular economic cycles and the government needs to address issues listed above to ensure that we have a country where no Child has to Work.