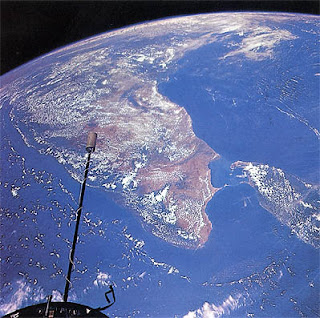 Sethusamudram is a project to create a shorter route for ships to cross the Gulf of Mannar between the coast of and . Such a bridge would save cost and time as ships travelling from the west coast of to the east coast of have to travel all around .

The official web site of the project says, 'Ships originating from the west of and destined for Chennai, Ennore, Vishakapatnam, Paradeep, Haldia and Kolkata have to travel around the Sri Lankan coast resulting in increase of travel distance and time. Apart from this ships belonging to Indian Navy and Coast Guard need also to traverse around . In order to reduce the steaming distances between the east and west coast of India and to improve the navigation within territorial waters of India, a navigation channel connecting the Gulf of Mannar and Palk Bay through Adam's Bridge has been envisaged so that the ships moving between the east and west coasts of India need not go around Sri Lanka.'

This seems an excellent idea; then why this opposition to the project?

Here are some of the reasons why some oppose this project –

All in all, it is a healthy debate and let democracy win!

It is a shame that government in the name of commerce is prepared to ignore what is an obvious historical landmark touched by a spiritual hand. Woe to he who endeavors in this blasphemy.