The Impact of a US slowdown on China and India 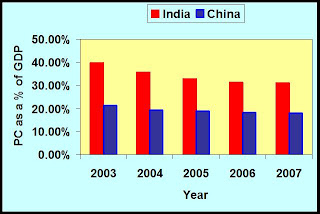 008. To understand at a very macro level on how this will impact China and India we must first visit the definition of GDP.

GDP is defined as the value of the goods and services produced in a year for a country .

The most common approach to measuring and understanding GDP is the expenditure method:

The first graph above denotes compares the personal consumption co 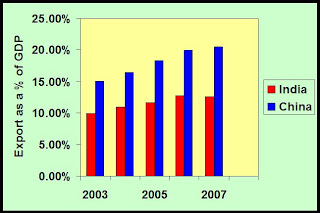 mponent of the Total GDP of India and China . In 2007 , 31% of the GDP growth of India has come from personal consumption i.e people buying and selling services domestically, whereas China 's personal consumption share of GDP is a mere 18%. The bulk of the GDP growth for China comes from its exports which are almost 20% of the GDP while India's export component as a share of GDP is 12.76%. The other statistics are comparable and the only thing to note from the data is that India's share of Investment component of GDP has increased from lower levels to be comparable to those of China ( As a % of GDP).